This year, we decided to start growing barley for the first time. We have about 24 acres of barley that we planted last fall as normal cover crop. We planted one bushel to the acre, but instead of terminating the cover crop, we harvested it for malt barley. Last year we grew wheat and became connected with Black Gold Malt Farm. They are looking for more farmers out of Iowa and the midwest to grow barley and shorten some of the supply chain loops.

Since we had started growing wheat and were already trying something outside of soybeans and corn, we figured why not try barley! All we did was drill in the seed at 7.5 inch spacings after soybean harvest in October. 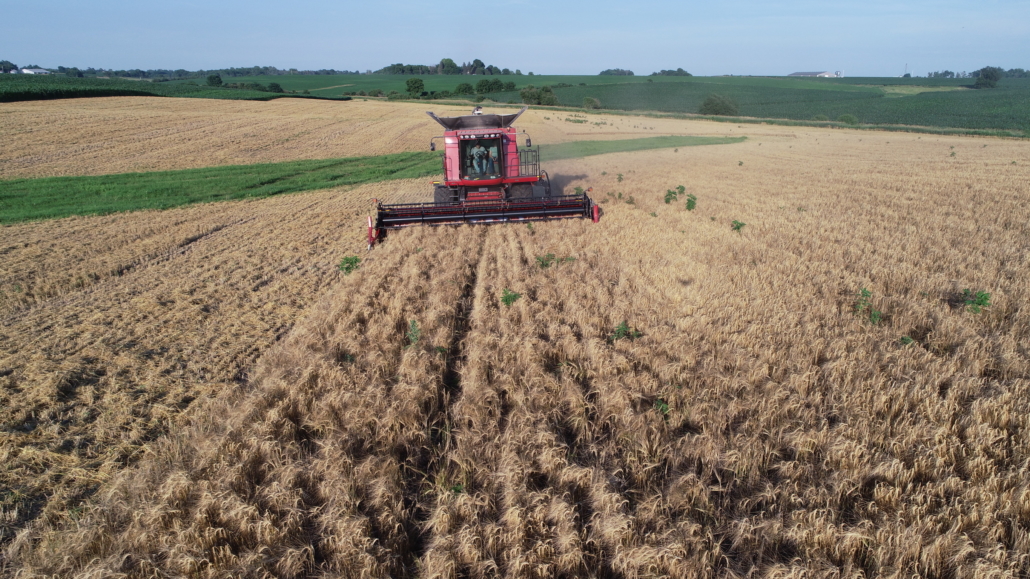 The key was to target a south-facing slope so it would receive more sun and heat during the winter and keep the barley a little bit happier. We also used a side hill that gave the barley natural drainage (there is some tile out here, too).

We weren’t sure how this barley would over-winter or how it would withstand our southeast Iowa winters. Turns out, it overwintered really well. We came through in March and frost seeded a little bit of crimson clover into a few areas just to try something new. We used three pounds of seed and just sprinkled it over the top of the barley. We also did spread on a little fertilizer during this time. We used about 50lbs each of MAP, urea, and potassium sulfate, which cost around $30 per acre.

Then, we did nothing! We waited and let everything grow. On July 2, we came in and harvested this barley. We cut pretty close to the ground and ended up with 47 bushels per acre at 11% moisture.

The day after harvesting the barley, we went in and planted soybeans which are already up and growing. Our goal here is to produce good quality beer while also continuing to plant soybeans and open up alternative revenue sources. After we take off these beans, we will plant another round of cover crop. Right now there is potential for another relay crop situation or mustard seed to go in this area in 2021.

By integrating small grains, we have been able to open up more revenue opportunities, create more diversity on our farm, and increase our options moving forward!