As promised, we want to tell the complete story of our experiment with 30 inch by 60 inch row corn here in Iowa on the Continuum Ag farm. Mitchell bought this plot in 2017. Last year it was soybeans, and they did really well. This 30 acre area did 80 bushels, which was awesome. The farm has good fertility but bad soil health. This blog accompanies an in-field video and more visuals from all of 2019.

We hit the farm with cover crops in the fall of 2018 and going into 2019 planted winter wheat. In the spring of 2019, we knifed in anhydrous at 120lbs/ac. Three weeks later (April 23rd), we planted the corn directly on top of the anhydrous knife. However, in the middle of the 60” gap, there was a strip of anhydrous that now ends up not being used.

So, going forward we want to make sure we’re controlling our inputs a lot better, indexing to the row better, and we couldn’t quite do that this year. The 120 units of anhydrous was applied with a stabilizer that helps to offset some of the negative impact that the anhydrous has on our microbes. This corn did not end up with starter on it, just because we ran out, or else we probably would have had a bit of starter fertilizer on it as well.

Later in the year, we came back and put a little bit of 32% UAN in with the herbicide. A couple days after we planted corn into the green, living, winter wheat cover crop. We terminated the cover crop off with a shot of Roundup. There was no residual in it at all. We actually variable sprayed the burndown with only the three nozzles that were directly over the two rows of corn turned ON. The three nozzles that were over the gap, we actually turned OFF. So we were able to somewhat control the herbicide. 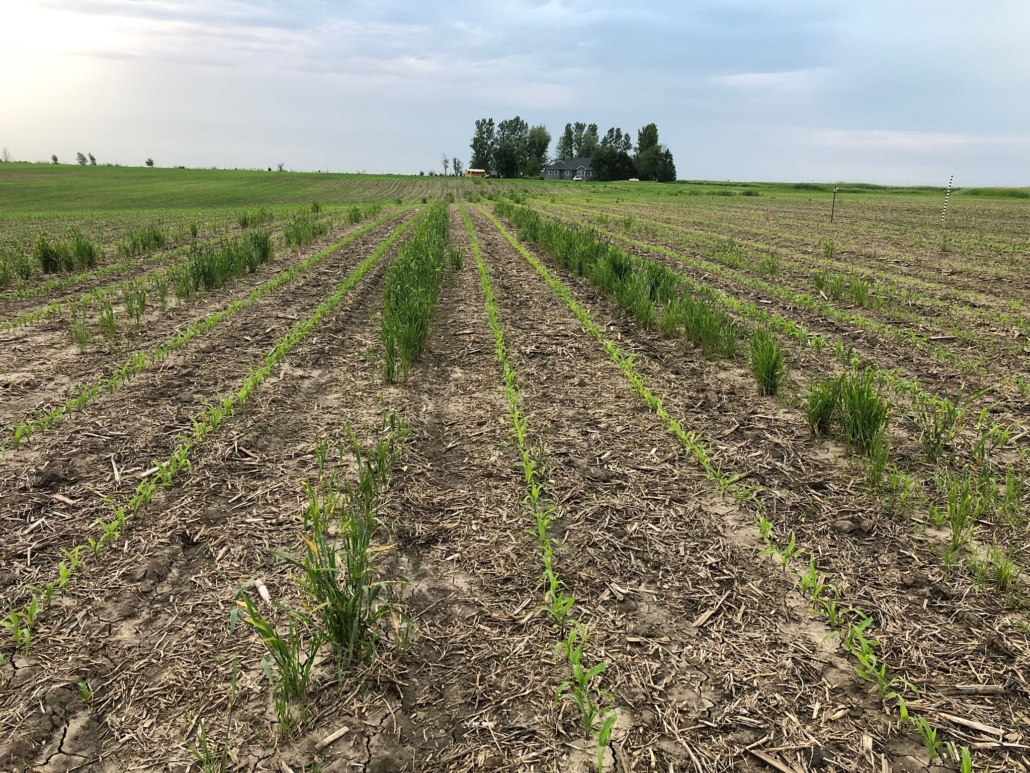 This shows the field after we sprayed roundup the first time. The grass is in the wide rows and this shows that there was some sprayer drift that killed some of the wheat that I wanted to keep alive to suppress weeds.

The plan was to terminate the cover crops (the winter wheat that was directly over the two rows of corn) to reduce competition, but then keep the wheat growing in the 60” gap in order to suppress weeds. The plan worked okay, but we did have a bit of herbicide drift into that 45 inch gap where we attempted to keep the cover crop alive. The herbicide killed just about all of the wheat, so weeds started coming through. We’ve got decent sized water hemp and foxtail growing through, which is all part of the cover crop now, but we don’t want big seed banks of all of these weeds out here. That was one downfall with doing this trail in this particular area, because it’s super weedy. So, as you’re trying this new system, pick an area that is clean!

The night before we came and interseeded (around June 17), we came out with a hand sprayer and sprayed off the weeds with Roundup. No residuals were applied with that at all. On June 17, we interseeded the following diverse mix of cover crop with a little push spreader: annual ryegrass, cereal rye, tillage radishes, hairy vetch, cow peas, and crimson clover. The goal of this mix is to improve nutrient availability, nutrient cycling and use the tillage radishes to bust up compaction layers. 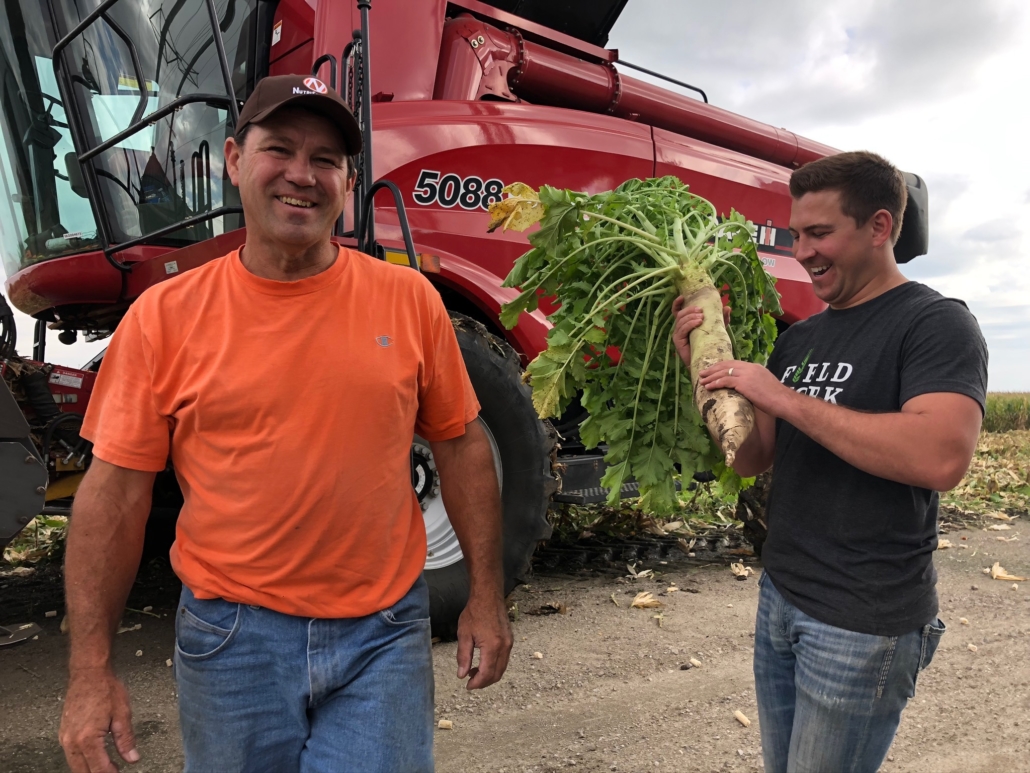 Check out this massive radish we found in this field!

Our soil health testing tells us that field has good fertility and there used to be cattle out here. We just need to make the fertility more available to our cash crops.

We interseeded the cover crop early and had rain, which all worked in our favor. We had one acre that we did not plant in June, instead waiting until July 10th to fly on the cover crop with a drone. This was a collaboration with a company out of Iowa City called, Rantizo. In July, we only had a ½ inch of rain, so we did not get much cover crop to germinate. There are some cover crops, but it was mostly a failure. We can contribute that to the lack of rain, not the method of application. We will definitely work with the drone again, as it should be a really good way to interseed like this on a larger scale.

Preliminary results for this entire area ( two acres: early interseeded and late interseeded) showed a yield of 196 bushels. 196 bushels of corn, planted on only ⅔ of the field and with only 140 units of nitrogen. The check strip next to it also did about 196 bushels. So, huge success with no yield difference! Ideally, we’d like to see 200 bushels. I know we can – in some parts of the field the yield monitor was consistently over 300, ranging from 285 – 320bu/ac.

We did not plant any extra cover crop over the June plants because we want to see what’s going to over-winter and whether or not there will be anything worth harvesting in 2020? All of the species we have out here do have the potential to over-winter, but we don’t think the radishes will. Next year, we’ll plant soybeans and maybe relay some of the rye/soybean combo.

Ideally, I’d like to have a 45 inch setup -45 inches of corn or soybeans, then 45 inches of cover crop for soil building and potential for relay crop. Where I had the July seeded crops, I raised the cereal rye cover crop planting rate, so we can try the 45 inch setup on soybeans next year, meaning drill 45 inches of soybeans, then turn off the next 45 inches in the setup, still using our drill. So, 7 ½ inch spacings but just turn on or off half the units. We’ll just block them off with duct tape or cardboard.

Overall, definitely a good trial, and we are really encourage farmers to try this out! We know there are many considerations to take into account and we’re happy to have those discussions with you!  Hit me up any time at 319-461-9056 or mitchell@continuum.ag

A Year at Continuum Ag

Well, where do I start? After almost one year at Continuum Ag, my journey has led me back home, to get away from the...

END_OF_DOCUMENT_TOKEN_TO_BE_REPLACED

Hey everybody, I hope you've had a successful harvest season. Things went well on our farm this year despite having drought...

END_OF_DOCUMENT_TOKEN_TO_BE_REPLACED

From family dynamics, to massive debt, to uncertainty in future markets, farmers today face a very wide variety of...